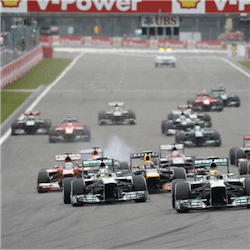 Three-time Formula 1 World champion Lewis Hamilton, coming off a win at Silverstone and a fourth place in Hungary, is odds-on favourite to win the Belgian Grand Prix on 27 August. Australian punters can back him via online betting sites at returns of 60c to 90c on the dollar.

Although his team, Mercedes, is ahead in the constructors’ championship, on the 2017 drivers’ championship ladder, the Brit is 14 points adrift of leader Sebastian Vettel.

Ferrari’s German lynchpin is being offered at between $3.33 and $4.00 to take his fifth win of the season at the Circuit de Spa-Francorchamps next Sunday. With four world championships of his own under his belt from his days racing for Red Bull, Vettel could pose a serious threat.

Valtteri Bottas is ranked third on the current ladder, and occupies the same place on the betting. Hamilton’s Finnish teammate has taken his first two Grand Prix wins this season, and finished on the podium six more times in the other nine races. Betting sites are offering between $3.50 and $6.00 on him winning in Belgium.

Australian Formula 1 fans will also want to consider WA star Daniel Ricciardo. The Red Bull driver is fourth on the ladder, despite retiring in three races so far. He’s finished in the points in all the others, including four thirds, and a win in Azerbaijan. Nevertheless, he’s ranked sixth in the betting at $20.00-$25.00, behind Kimi Raikkonen and Max Verstappen, so the Aussie could prove rewarding.

Vettel’s teammate, Raikkonen, is being offered at $9.00-$14.00, but the local fans will be backing the Netherlands’ Max Verstappen, who was born in Belgium. The sudden return of interest in Formula 1 in that corner of the world, at its highest since Michael Schumacher retired, has been attributed by many to the 19-year-old record-breaker’s stellar career over the past two years.

At odds ranging from $12.00 to $24.00, Verstappen, like teammate Ricciardo, is hoping that Red Bull’s bold tyre choices will bear fruit at Spa. The team has opted for nine sets of Pirelli’s purple ultrasoft tyres, only three sets of red supersoft, and a single set of yellow soft. If the gamble pays off, Red Bull could see both of its drivers on the podium for the first time all season and if you want to place your bets, you can do so online at Luxbet.