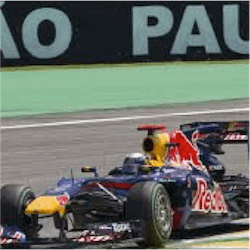 On 333 points after nine wins in 18 races, Lewis Hamilton has had the 2017 Formula 1 Drivers’ Championship in the bag since he won the United States Grand Prix on 22 October. As such, Sunday’s Brazilian Grand Prix in Interlagos, Sao Paulo is not going to worry him unduly, despite having last year’s win on the circuit to defend.

With Mercedes-Benz also unassailable on 595 in the Constructors’ Championship, the British ace could afford to take his foot off the pedal in Mexico last week, ceding pole position to Sebastian Vettel for the first time in four races, and finishing ninth.

But with Ferrari’s Vettel on 277 points, leaving the Scuderia in guaranteed second place with 455 on the constructors’ ladder, ahead of Red Bull Racing on 340, second place on the drivers’ ladder is still up for grabs. That’s because Hamilton’s teammate, Valtteri Bottas, is only 15 points behind the German on 262.

Vettel’s last win was eight races ago in Hungary, and in the seven since he’s had to retire twice, and managed two seconds, a third and two fourths. Bottas has finished ahead of him eight times this year, four of them in the past seven races.

So the Finn will be gunning to beat the four-time world champion to the podium in the final two races of the season, in Brazil and Abu Dhabi a fortnight later, while Vettel fights to hold him off.

Australia’s Daniel Ricciardo had two frustrating retirements in a row in Austin and Mexico City, but the red Bull driver is still 14 points ahead of Vettel’s teammate Kimi Raikkonen on the drivers’ ladder. Ricciardo is fourth on 192, with Raikkonen on 178, and Ricciardo’s teammate Max Verstappen sixth on 148.

The Dutch 20-year-old pulled off a surprise third place at last year’s Brazilian Grand Prix, behind Hamilton and Nico Rosberg, and handled a sudden cloudburst in the middle of the race particularly impressively. He half-joked a few days ago that rainy weather over Sao Paolo’s Autodromo Jose Carlos Pace on Sunday might see him beat Hamilton this time.

Online sports betting sites have Hamilton at even money or slightly odds-on to win in Brazil, with Vettel at $3.50, Verstappen at $4.00, Ricciardo at $7.00, Bottas at $10.00, and Raikkonen at $20.00 and above. Get your bets in online at Luxbet, where you’ll find the best odds, bonuses and more.