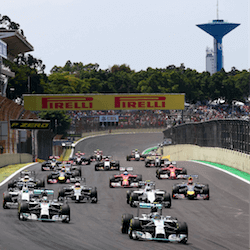 Brazilian Grand Prix Should Be a Corker

There’s no danger the Brazilian Grand Prix will turn into a damp squib, even though Lewis Hamilton and Mercedes are already 2017 Formula 1 champions. With plenty more rivalries to sort out down the ladder, the final two races in the 2017 F1 season will have plenty to interest Aussie motorsport punters.

Hamilton will want to retain the Brazilian title he won last year, and he’ll certainly be smarting from his 9th-place finish in Mexico, champion or no champion, so Sao Paulo’s Autodromo Jose Carlos Pace should see some thrilling F1 racing on Sunday.

Brazil will be a big race for New Zealander Brendon Hartley. The 27-year-old is getting his third start this season for Scuderia Toro Rosso, and after finishing 13th in the USA and being knocked out by a laundry list of engine problems in Mexico, he’s itching to finish among the points.

At $2,000.00 on some online sports betting sites, he’s a complete long shot to win or even podium, but he could conceivable elbow his way into the first 10.

McLaren Honda’s Fernando Alonso is looking forward to Sao Paulo, as he reckons the track will be a better fit for MCL32 than the other circuits in recent races. The Spaniard has had frustrating car problems all season, retiring or not starting in eight races, with his best finish sixth in the Hungarian Grand Prix.

He’s at $1,000.00 to win in Brazil, which might be a tad ambitious, but he also has a shot of finishing among the points.

Topping the betting is Hamilton, at even money to around $1.20, which is a fair assessment, considering he just equalled Sebastian Vettel’s record of four drivers’ championships.

The Ferrari ace, with two Brazilian Grand Prix wins under his belt, is second in the betting, at $3.00-$4.00, but his biggest concern, whether he wins at Interlagos or not, will be staying ahead of Valtteri Bottas.

Hamilton’s Finnish teammate, just 15 points behind Vettel in third, is determined to overtake the German in the last two races. Betting sites don’t believe he can: Bottas is at $8.00 and above.