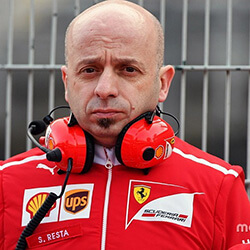 Former Ferrari chief designer Simone Resta has confirmed that he will be rejoining the team officially later on this season after leaving his current team of Alfa Romeo. Resta joined the Alfa Romeo team, which was then known as Sauber, during May last year, and will be leaving at the end of July to jong Ferrari Formula 1 programme for the last stage of the season.

Alfa Romeo in the meantime have promoted Jan Monchaux, the head of aerodynamics, to the role of technical director to fill the empty position. Resta’s return to Ferrari follows a drop in from last season to the current one, as the team has not won a race in nearly a full year.

Ferrari started the 2017 and 2018 seasons with a car that was capable of taking on Mercedes, and was arguably the fastest on the grid before they felt back in the final third for both seasons. This year the team has struggled to keep pace with Mercedes, with the car lacking downforce and Ferrari only showing any real competition on tracks that have specific characteristics, such as slow corners and long straights.

Resta’s return to the team was first hinted at during the Monaco Grand Prix at the end of May, when tea, principal Mattia Binotto – who was promoted to the role of technical director at the beginning of this year – admitted that it was likely that Resta would be joining the team once again.