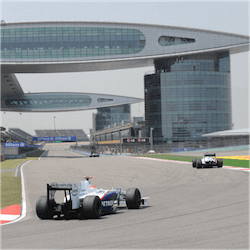 The second Formula 1 Grand Prix of the post-Ecclestone era will be smoking up the streets of Shanghai on China’s eastern seaboard this Sunday, in a time zone that suits Australian motorsport fans.

Online punters will be asking whether Sebastian Vettel can take a second straight victory for Ferrari, or if Lewis Hamilton will instead reassert the Mercedes dominance so rudely usurped at the Australian Grand Prix.

The Chinese Grand Prix covers just over 300km: 56 laps of the 5.451km street circuit laid out in the industrial suburbs of the world’s most populous city. But in contrast to the Albert Park circuit in last month’s opening Formula 1 race of the season, the Shanghai circuit features several long straights, which should please Hamilton.

The British driver, who finished second to Vettel in Melbourne, has been vocal about wider cars and increased downforce kicking up more turbulence to make passing nigh impossible. Sunday’s circuit should offer Lewis and the other drivers plenty of passing opportunities, opening up the race.

Ferrari Needs Two in a Row

The last time Scuderia Ferrari managed consecutive Formula 1 victories was way back in 2010, with Fernando Alonso’s back-to-back wins in Italy and Singapore. Vettel and teammate Kimi Raikkonen, who finished fourth in Australia, would dearly love to break that hoodoo in Shanghai.

At this stage, it looks like Mercedes’ Hamilton and Valtteri Bottas, who finished second and third in Melbourne, are the only ones likely to stop them. Dutch wunderkind Max Verstappen only managed fifth for Red Bull in the Australian Grand Prix, and complained that he was having trouble with power and grip.

It may all boil down to pole position: the Shanghai race has been won from pole eight times in 13 years. Although, as much as Vettel’s supporters will want to see him first on the grid and taking his second win of the 2017 championship, they can’t ignore the fact that Hamilton holds the Chinese Grand Prix record of four wins, most recently in 2015. Sunday’s race might end up nail-bitingly close.