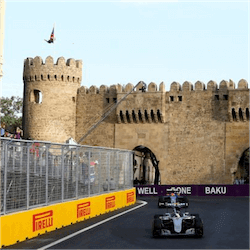 First held in 1983, the European Grand Prix led a fairly nomadic life, appearing on different circuits in Spain, Germany and the UK until it was discontinued after the 2012 Formula 1 season. It was revived in 2016 in Baku, capital of Azerbaijan, the small republic in the south Caucasus sandwiched between Russia, Armenia, Georgia, Iran and the Caspian Sea.

The 2016 European Grand Prix was won by Mercedes driver Nico Rosberg, with Ferrari’s Sebastian Vettel in second, more than 16 seconds behind him. This year, the race will again take place on the Baku City Circuit, a street circuit laid out in the capital.

However, as the race is now settled in Baku and looks set to remain a part of the Formula 1 championship for the foreseeable future, Sunday’s event is being billed as the Azerbaijan Grand Prix for the first time.

Vettel Keen to Stay on Top

Vettel is still with Ferrari, of course, although reigning Formula 1 World Drivers’ Champion Rosberg has retired from racing, and serves as an ambassador for Mercedes these days. His 2016 teammate, Lewis Hamilton, is now the senior Mercedes driver, although Valtteri Bottas is contesting that distinction strongly.

Vettel and Hamilton are also locked in a battle for supremacy at the top of the 2017 drivers’ championship that swings back and forth like a pendulum. Hamilton’s win at the Canadian Grand Prix on 11 June brought them back to a kind of parity, with three wins each this season, but Vettel also has three second-place finishes and only one fourth, while the British driver has managed only two seconds, a fourth and a seventh this year.

Vettel now has 141 points on the ladder, with Hamilton on 129, Bottas on 93 and Kimi Raikkonen, Vettel’s Ferrari teammate, on 73.

Ricciardo Also One to Watch

The Mercedes-Ferrari tussle will probably garner most of the attention at the Azerbaijan Grand Prix, but Australian sports betting fans should also consider a punt on Aussie Daniel Ricciardo. The Red Bull-Tag Heuer driver had a frustrating start to his season, as car trouble forced him to retire at both the Australian Grand Prix and the Russian Grand Prix.

However, his team seem to have sorted out the technical difficulties, and Ricciardo has now finished third in three consecutive races: in Barcelona, Monaco and Montreal. He’s sitting fifth on the drivers’ ladder with 67 points, so he will be itching to make the podium again in Baku on Sunday.