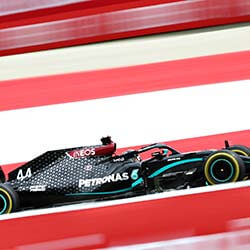 There will no longer be a Turkish Grand Prix competed next month. Formula 1 announced the cancellation of the event after Turkey was placed on the UK’s list of red-listed countries for travel, which listing has now made the country untenable.

Since seven of the ten F1 teams are based in the UK, and given the full 10-day isolation requirement upon their return back home, preparations for the next round would have been impossible.

The aim remains for a record 23-race season this year, Formula 1 has now said, which has led to the reshuffling of the calendar so as to include an extra race to be staged in Austria.

F1 CEO Stefano Domenicali has in the meantime expressed optimism over the sport’s ability to adapt to ever-changing circumstances. Domenicali said that while the world of F1 racing had been looking greatly forward to a race hosted in Turkey, the up-side in terms of the most recent developments is that of the sport being able to find last-minute solutions for unexpected scheduling challenges.

The change to the schedule means teams will now have to compete in a triple-header with only a single week off before returning to the track for the British Grand Prix. Of particular concern has been the size of recent outbreaks in Mexico and Brazil, which has led to fears over further disruptions to the season.

The current series continues in Monaco next weekend, with Lewis Hamilton currently leading Max Verstappen by 14 points on the World Championship rankings.