Formula 1 officials have announced that a new agreement with the owners of the Miami Dolphins NFL stadium will see it set as a new venue for the racing event in 2021. It’s the latest development in an attempt by F1’s owners, Liberty Media, to establish a race within Miami. The 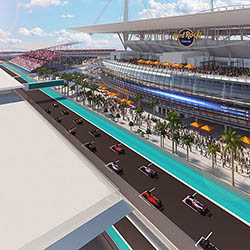 proposed features include a brand new track layout that will loop around the Dolphin’s Hard Rock Stadium, which is locate in central Miami.

Organisers have a number of challenges to overcome before the stadium is ready to host its first race, which includes approval from the Miami-Dade County. There has also been vocal opposition to holding a grand Prix race within the city. It’s not the first attempt made by the F1 to break into the Miami scene, and they’ve haven’t had success building their track in downtown Miami that went over a bridge to Miami port and back, and construction has come to a standstill.

The new proposal is on land that is owned by Stephen Rosso, who is also the owner of American football’s Miami Dolphin. In a statement released by the F1, they said that commercial boss Sean Bratches, along with chief executive of Hard Rock Stadium Tom Garfinkel, have emphasised the financial benefits of hosting the race in the city.

Residents have also raised concerns regarding noise, pollution, and increased traffic, and are currently being backed by commissions from the Miami-Dade council, which will be voting on the proposition in the next few weeks.