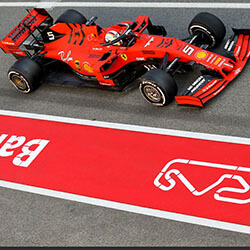 Team Ferrari has recently announced that they will be upgrading their engine two races early for the Spanish Grand Prix in the hope of putting an end to Mercedes’ domination on the track. Mercedes have claimed one-twos in their last four races so far in the season, and Ferrari have been unable to keep up due to a series of driver errors and reliability problems.

The new motor will be making use of a new fuel, which they hope will increase performance on top of the aerodynamic upgrades that they will be installing. Mattia Binotto, boss of Ferrari, told reporters that they are pushing hard to make up the ground they’ve lost. Binotto continued, saying that the engine had initially been set for the Canadian Grand Prix, and that it was a team effort to push the developments forward, adding that they are behind in the championship and they need to keep up, meaning that their development was more important than ever.

Ferrari’s best results so far are three third places, one for the Bahrain Grand Prix that was claimed by Charles Leclerc, and the other two for the Chinese and Azerbaijan Grand Prix races, of which Sebastian Vettel took third place. Leclerc, who is racing in his first season with the Ferrari team, was set to take the victory in Bahrain before his engine shut down during the closing stages. Vettel was also unable to make any real game as he had spun out in the same race.