Formula One Headed For Miami In 2022 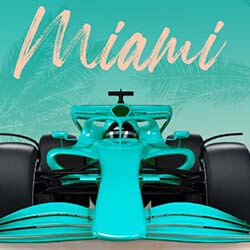 Formula One is finally headed for Miami.

After a Miami Grand Prix race had been in the pipeline for a number of years following Liberty Media’s acquisition of the sport in 2017, F1 on Sunday finally announced an agreement to stage a race in the city beginning next season.

A race in Miami will next year become only the second in the US in the history of F1 – second after Austin’s Circuit of the America’s, which had been an annual fixture on the Formula One calendar since 2012.

Formula One CEO Stefano Domenicali during the run-up to Sunday’s Emilia Romagna GP said the sport was thrilled to announce F1 heading for Miami in 2022. He described the United States to be a key market of growth for the sport, adding that F1 had been encouraged by its ongoing growth reach in the US.

Domenicali also revealed that F1 would be working in close collaboration with the Hard Rock Stadium team as well as the FIA so as to ensure the circuit’s ability to deliver a “sensational” racing experience for drivers and fans alike.

The newest edition to F1’s track portfolio will be 3.36 miles long and set to include 3 straights and 19 corners. And although no date for Miami has been officially announced as of yet, the addition of a second US event could very well see the number of rounds per season upped to a record 24.