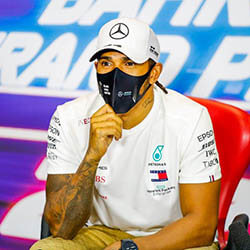 Formula One world champion Lewis Hamilton will not be participating in the weekend’s Sakhir Grand Prix following the return of a positive test result confirming COVID-19 infection. Hamilton is as a result now in managed isolation in Bahrain, F1 has confirmed, and is the third driver to test positive this season. The other two drivers who previously tested positive are Lance Stroll and Sergio Perez.

Though a replacement for the Mercedes driver has not yet been named, Stoffel Vandoorne will be making his way to Bahrain at the close of his participation in Formula E. This according to a confirmation received from Mercedes. Stoffel Vandoorne and Esteban Gutierrez are the reserve drivers for team Mercedes.

Hamilton reportedly last week tested negative three times over, but on Monday started displaying mild flu-like symptoms. This, coupled with a positive test result received by someone the F1 champion had had close contact with prior to his departure for Bahrain, had reportedly prompted him to request an additional test on Monday morning. The remainder of Hamilton’s contacts have in the meantime all been declared, confirmed Mercedes on Tuesday morning.

Mercedes also confirmed that the 35-year-old is despite his positive result and mild symptoms, otherwise feeling fit and in good health.

The upcoming Sakhir Grand Prix will be the first Grand Prix missed by Hamilton across his 14-season professional F1 career. The interruption effectively ends the Formula 1 star’s record run of 265 consecutive starts.

Hamilton’s absence from the weekend’s Grand Prix also puts on hold at least for this year his chasing of Michael Schumacher and Sebastian Vettel’s joint record of 13 wins recorded during a single season.