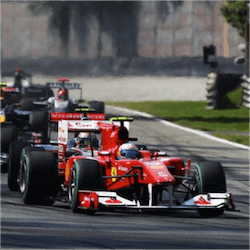 We are heading into the last European race of the F1 calendar. This weekend the teams head to the historic Monza raceway to contest the 2017 Italian Grand Prix. Team Ferrari is not about to let Lewis Hamilton and Mercedes snatch a victory from them on their home ground. Hamilton destroyed the competition at last week’s Belgium Grand Prix and Vettel will be wanting to make up for it.

Vettel is currently the top ranked driver in F1 but a loss at Monza will mean he gives up his spot to Hamilton. Monza is easily the fastest course on the F1 calendar, which will be favourable for Ferrari. Vettel has reached Pole Position 3 times before at Monza, one of which was with Red Bull in the pouring rain. If he does manage to win it, it will be Ferrari’s second win in Italy since Schumacher left in 2006.

What could be a turning point in the race is Mercedes new engine upgrades. Apparently there appears to have been an agreement between Mercedes and Ferrari that no side will make use of an engine upgrade before Monza, and now Mercedes have gone against that.

All engines at and after Monza will need to run at a 0.9l oil burn ration for every 100km. The new spec Mercedes engines will be running at a 1.2l oil burn ratio. Mercedes introduced their new engines at Belgium and Lewis Hamilton did end up winning the races. If that was the engine specs, Hamilton’s talent or simply luck, remains to be seen at the Italian Grand Prix.

Mercedes are slowly turning into the team that the fans love to hate, but the fact remains that they will have a massive target on them this coming weekend.

Red Bull are entering the race with a lot of confidence and other than Vettel, Ricciardo could be the man to take down Hamilton.

The high-speed course could potentially prove to be too much for the Red Bull machines, but Ricciardo has shown before what he can do with an under-spec car.

Vettel and Hamilton both have 3 wins at Monza and Ferrari have clinched the most pole positions thanks to Michael Schumacher who is the driver with the most wins there, 5 between 1996 and 2006. The 3.6 mile track will be run for 53 laps. The current course lap record holder is Rubens Barrichello who ran a 1:21 at the course in 2004.