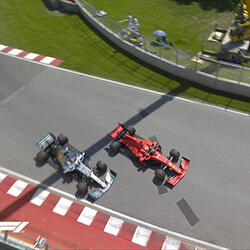 Sebastian Vettel lost first place in the Canadian Grand Prix to British driver Lewis Hamilton after the German player was penalised for driving dangerously against his biggest rival. The Ferrari driver was under pressure from the world champion when he made his mistake, running wide while coming through Turn Three, pushing Hamilton wide as he corrected back on to the track.

Stewards for the race decided that Vettel had unsafely rejoined the race and gave him a penalty of five seconds for forcing the Mercedes’ drier wide. Hamilton would have most likely passed Vettel if he wasn’t blocked when there were still 22 laps remaining on the track. The penalty has already led to a major controversy in the racing world, but Hamilton remains adamant that Vettel had been unfair in his mistake.

After the incident, Hamilton was heard on the radio commenting Vettel, saying that he had come back on to the track so dangerously. Vettel had complained that Hamilton could have moved inside, but that the situation was misread by all parties. Despite this, many feel that Vettel should have been excused from the race and allowed to challenge Hamilton on even ground.

This is another in a long line of mistakes for the Ferrari driver, whose 2018 season slowly fell apart due to the many mistakes he had made, with his last being in Bahrain earlier in the year, when he spun out on the track after moving passed Hamilton.