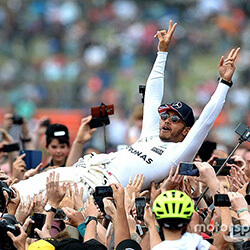 British driver Lewis Hamilton has taken first place at the British Grand Prix after an exciting race that saw a crash occur between Sebastian Vettel and Max Verstappen. Hamilton took advantage of a safety car period to move back on to the track and reclaim the lead after Valtteri Bottas was held back after an early attack from his Mercedes team mate.

Ferrari’s Charles Leclerc and Red Bull’s Max Verstappen had fought for third place for most of the track. Their battle would have been the highlight of the race had the collision not occurred between Vettel and his Dutch opponent, after which the German four time winner had been given a 10 second penalty along with two penalty points on his super licence.

Hamilton’s win has extended his lead by 39 points on the roster at halfway through the season, and despite his brilliant season so far, it’s expected that much of the spotlight will now shine on Vettel after he made another error in the head of the race, the latest in a series that have spanned the last season for the driver.

After the race was completed, Hamilton told reporters that he was proud to be at the race today in front of a home audience, and he was grateful to everyone that had made it out for the day. Bottas congratulated Hamilton, and said that it wasn’t really his day but the pace was good.