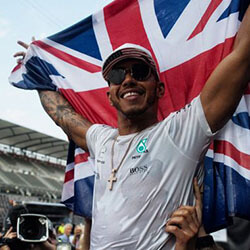 Lewis Hamilton claimed his fifth world Drivers Championship title at the Mexican Grand Prix, drawing level with Juan Manuel Fangio in Formula One history after he came in fourth across the finish line, with Max Verstappen taking the number one position for the race.

Hamilton’s new title means that he is know among the elite F1 drivers, all of which have won over five titles. The only driver ahead of him now is seven-time champion Michael Schumacher. Hamilton’s earned the titles in 208, 2014, 2015, 2017, and now in 2018.

The British driver only remaining champion driver is now Ferrari’s Sebastian Vettel, who came in second in the Mexican GP, and was desperate to hold on to his position while trying to push Hamilton out of the winning bracket for the last few races of the season.

After completing the race with his new title, Hamilton performed a doughnut with his car, much to the glee of the cheering crowd, before jumping out of his car and running to embrace his team. Hamilton told reporters after the event that he feel humbled to have come so far with Mercedes – the driver joined the team when he was 13 – and being alongside the great Fangio.

Hamilton, who began the race at third place on the grid, suffered from severe wearing of his tyres despite a strong start, and decided to take the race at a safer pace, giving up a chance on the podium but earning his title nonetheless.