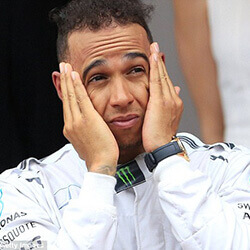 Lewis Hamilton, driver for the Mercedes AMG Petronas, managed to grab the pole position at the 10th race of the 2018 season which took place at Silverstone, but he didn’t maintain the position for long after the 52-lap race had begun.

Sebastian Vettel, who was driving for Ferrari, overtook Hamilton not long after the race had started, and Valtteri Bottas was the next to pass Hamilton to grab second place. Other Ferrari start driver, Kimi Raikkonen was the next to try and overtake Hamilton in a move to take third place.

As Raikkonen was attempting the pass, he made contact with Hamilton’s Ferrari, sending Hamilton spinning out and stopping in front of the crowd. The mishap forced Hamilton back to 18th place, and in a car that Hamilton said was more damaged than the Ferrari team was willing to let on.

The incident resulted in a 10 second penalty for Raikkonen, which he served waiting in the pits. Hamilton continued on, and thanks to his tyre strategy and two safety car periods, Hamilton eventually made it to second place by the end of the race, just 2.264 seconds behind Vettel, with Raikkonen coming in third.

Hamilton was displeased with Raikkonen’s actions, and he went on to tell reporters that this was the second incident caused by Ferrari drivers in the last few races, and that Ferrari needed to position themselves better in the races, saying that it was difficult to keep track of the red cars.