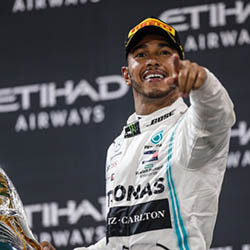 Lewis Hamilton once again proved his mettle on the track after he took the top of the podium at the Abu Dhabi Grand Prix, completing the season with his sixth world driver’s title. The Mercedes driver had led from the pole position, and quickly took off into the distance while everyone else tried their best to keep up. Max Verstappen of Red Bull had taken a comfortable second after his team had fallen back. Charles Leclerc had taken second for the early laps ahead of his teammate, but eventually fell into third place.

Leclerc had defended himself against an attack from Valtteri Bottas of Mercedes for the closing laps of the event, with the Finn holding close in the final lap after an otherwise brilliant performance despite starting at the back of the grid. Leclerc had been at risk of losing his chance at third place after the governing body the FIA had found that before the race the total amount of fuel Ferrari had claimed was in his car was different to when the car was checked. Ferrari received a €50,000 fine for their transgression, but Leclerc was allowed to keep his third place win.

Hamilton’s latest win marks his 11th of the 21 races that he’s participate din this season, and stands equal to his best performances in both 2014 and 2018. It also marks the 84th win of his career so far, putting him just seven behind the record held by Michael Schumacher.