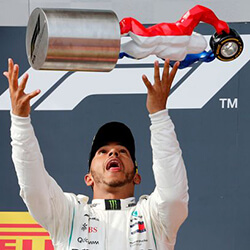 British F1 driver Lewis Hamilton has taken control of the world title after winning a dominant victory during the French Grand Prix.  Hamilton proved unstoppable against all his opponents, even his own teammate Valtteri Bottas as the 34 year old took his sixth win in eight races.

The five-time winner now leads Bottas in this season’s roster by 36 points thanks to a win and fifth place after only eight races. Bottas crossed the line a distant second as he held off an attack from Ferrari’s Charles Leclerc for the final lap. Max Verstappen of Red Bull took fourth place while Ferrari’s Sebastian Vettel finished in fifth. Hamilton’s only real irritation during the race came in the form of Vettel stealing a point for fastest lap due to a late pit stop for fresh tyres.

Hamilton remained in control for most of the race after he converted the pole position into the lead. He set a pace in the opening laps and looked after his tyres with a full load, and continued to put on the pressure despite pit stops approaching. He had increased his lead over Bottas by a total of five seconds in eight laps before the Finn was called in for his first stop on lap 23. Hamilton followed Bottas in, and re-emerged with an even greater lead of 11 seconds, and from there the race was essentially over for everyone else as Hamilton dominated until the end of the event.