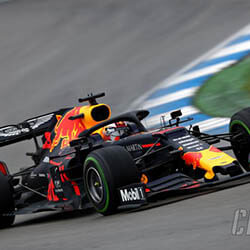 Max Verstappen of Red Bull claimed his second victory of the year after a chaotic race at the German Grand Prix that saw random bouts of rain throughout. The Dutch driver led race that saw Ferrari’s Sebastian Vettel take second place from last on the grid, while Toro Rosso’s Daniil Kvyat ended the race in third.

Lewis Hamilton made two mistakes, and finished the day off in 11th place. The Briton did not lose any ground to Valtteri Bottas in the Championship after the Finnish driver crash. It was a bad way for Mercedes to end their weekend after the team had celebrated 125 years in the motorsport, along with their 200th Formula 1 race. The team’s drivers were not the only to suffer some mishaps on the road in dangerous conditions, with a race that featured six safety cars, two of them being virtual. Verstappen made five pit stops, changing between wet and dry tyres throughout the event.

Charles Leclerc of Ferrari crashed when pushing out ahead for second place, while Nico Hulkenberg made the same mistake in the same place, which was also where Hamilton had made one of his mistakes. After the race, Hamilton was technically classified as finishing in ninth following 30-second penalties that were handed to Alfa Romeos Antonio Giovinazzi and Kimi Raikkonen, who had both committed driver aid infringements. Hamilton therefore managed to gain two points for the title race over his fellow teammate Bottas.