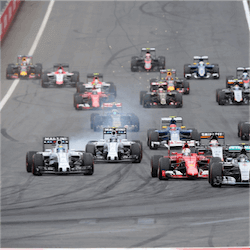 Sunday’s Austrian Grand Prix at the Red Bull Ring in Spielberg just got more exciting for Australian online betting fans. British manufacturer McLaren has announced that the upgraded Spec Three Honda engines that their drivers have been waiting for all season have finally arrived, so Fernando Alonso and Stoffel Vandoorne at last have the grunt to compete with the big boys.

It’s hardly surprising that Alonso blew off the Monaco Grand Prix, the sixth race of the 2017 Formula 1 Championships, to go and try his luck at the Indy 500 instead. He and teammate Vandoorne have been plagued by mechanical failures this season, finishing in only four of the eight races to date.

Even when they did stay on the track for the duration, the McLarens just didn’t have the power to compete with Mercedes, Ferrari and Red Bull Racing: Alonso’s best finish so far this year has been ninth in Azerbaijan, while Vandoorne managed his best of the season, a 12th place, in the same race. With the new engines cutting 0.3s off lap times when they were tested in Azerbaijan practice, McLaren may perform much better for the rest of the year.

Sebastian Vettel for Ferrari and Lewis Hamilton for Mercedes are not going to make it easy for Alonso or Vandoorne on Sunday, of course. Their battle for the top of the drivers’ ladder is no doubt going to be more intense after their heated altercation in Baku, but Vettel is currently still leading the drivers’ championship on 153 points, with Hamilton second on 139.

Maddeningly for Ferrari, Mercedes is nevertheless still ahead in the constructors’ championship, by 250 to 226. That’s largely due to Hamilton’s teammate, Valtteri Bottas, who has outperformed Kimi Raikkonen in the other Ferrari consistently.

But both Vettel and Hamilton will have to watch out for Red Bull-Tag Heuer drivers Daniel Ricciardo and Max Verstappen in Austria, too. The Red Bull Ring is their team’s home circuit, and the Austrian Grand Prix gives them a great opportunity to build on Ricciardo’s first win of the season in Baku, and stay in contention for both the drivers’ and constructors’ championships.

Hamilton is odds-on to win on Sunday, according to most betting sites, while Vettel is being offered at around $2.50. If Ricciardo does pull off back-to-back wins, he’ll be well worth it at around $25.00.