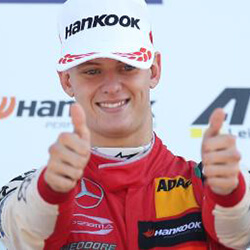 Mick Schumacher, making his first foray into the world of Formula 1, proved he has his father’s skill for driving after setting the second fastest time at the official Bahrain test in his Ferrari. The 20 year old, son of seven time winner Michael Schumacher, finished 56 laps, and was on course to be the fastest until he was overtaken by Red Bull’s Max Verstappen.

Schumacher has stated that he found the 2019 Ferrari car incredible because of the power, but also quite smooth to drive. He is set to have a second test day, although this time he will be piloting a vehicle from Alfa Romeo. Like other drivers that are experiencing their test for the first time in an F1 car, Schumacher explained that he was blown away by its braking capabilities, and that it seemed to him that it’s possible to brake later and later into a corner, and the car would take the turn anyway.

Schumacher has entered the racing world after attending the Ferrari driver academy, who was often involved with the team with his father growing up, with Schumacher saying that he was at home in the garage from the first moment, and that many people have known him since he was a child. Schumacher’s fastest time during the test was 2.11 seconds slower than Charles Leclerc’s pole position lap for the latest F1 GP in Bahrain. He also clocked a time 0.597 seconds slower than Verstappen’s fastest lap.