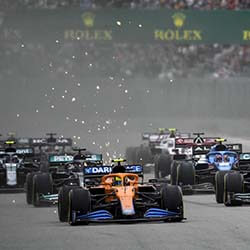 This November will witness Qatar host its very first F1 Grand Prix as it slips into the vacant slot left by the cancelled Australian GP. But it will be more than a once-off affair for the Persian Gulf territory, as it’s also now set to officially join the F1 calendar for a period of 10 years, starting 2023.

Qatar’s participation this year means rivals Lewis Hamilton and Max Verstappen will be battling it out across three final rounds in the Middle East this year, with the latest addition to the annual calendar scheduled to host a race before Saudi Arabia and Abu Dhabi conclude the current season.

The many challenges and cancellations faced by F1 this year aside, the sport will still complete a record 22-round season for 2021. Hamilton currently leads the way only 2 points ahead of Red Bull’s Max Verstappen.

According to recent statement for F1, organisers are extremely grateful to Qatari authorities, and in particular the Qatar Motor and Motorcycle Federation, for the incredible help and enthusiasm shown in hosting an event at such short notice this season. An F1 spokesperson said Qatar had been eager to help by offering that a race be competed at the Losail International Circuit, and that this eagerness to assist was what ultimately led to a longer partnership deal being tabled and agreed upon.

Of allegations of F1 helping to “sportswash” the Gulf country in terms of its many human rights violations, organisers said Formula One has for decades long worked exceptionally hard at trying to be a positive force everywhere its races are staged – and will continue to do so uninterrupted.