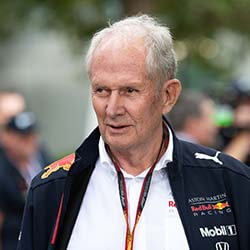 Commenting on the crash on Sunday, Hamilton said he believes he’ll have to see a medical specialist over the injury to his neck. Marko is however insinuating that Mercedes is making much more of the incident than what is really necessary.

Speaking to a local Aussie newspaper this week, the Red Bull advisor stressed the crash to have been a “normal” F1 racing accident, and not the massively disastrous affair Mercedes is now making it out to be. Marko pointed out how the medical car had not deemed it necessary to stop as Hamilton made his way back out of the gravel following the incident. He said what’s happening right now is a show being put on by Mercedes.

The crash happened midway through the race when the cars of the two drivers touched wheels. This led to Verstappen’s Red Bull car being jolted up and into the air before coming down hard right on top of Hamilton’s head. Both cars then proceeded to slide into the gravel’s trap.

While Mercedes has insisted with the Dutchman being to blame, Verstappen immediately accused Hamilton of having failed to leave him with sufficient room for avoiding the accident.

F1 has in the meantime concluded its post-race investigation and has handed a three-place grid penalty to Verstappen for being largely to blame for the crash.