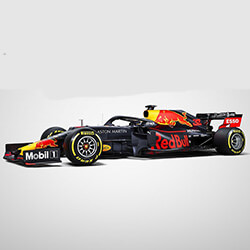 Red Bull has announced their first Honda-powered car that is set to take on the 2019 season, and its initial laps will be driven at Silverstone by Max Verstappen.

The former champions finished last season third overall in the constructors’ championship, where they won four races. Verstappen, who had shared the victory with Australian Daniel Ricciardo for the season, now has a new teammate for the upcoming year in the form of French Pierre Gasly. The new car, dubbed the RB15, was launched with red and black livery, although this is temporary.

The team is expected to change the car to their normal colours by the time of the season opening race in Melbourne, which will be taking place in March. Red Bull decided to part with their previous engine partners Renault at the end of last year, and have since switched to Honda, who have also provided engines to Red Bull’s sister team Toro Rosso.

Toro Rosso finished in ninth place last year with their Honda engine, and despite this, Red Bull remains confident about the progress that the Japanese manufacturer has made in the interim. Verstappen, talking about the new car, has said that he’s excited to get started as the off season has been long for him, and that he’s most looking forward to starting the season and seeing how the entire team operates with Honda. He added that he’s also excited to see how the engine performs with the new chassis.