Robert Kubica To Depart From Williams 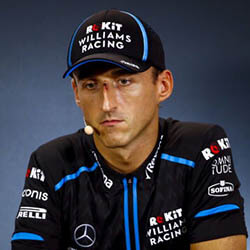 Robert Kubica has announced that he will be departing from Team Williams at the end of the current season. The driver had returned to Formula 1 at the beginning of this year after an eight-year absence from the sport that followed from injuries he sustained during a rally crash in 2012. The return of Kubica is testament to his character, but the results of the team this season have not matched the driver’s standards.

Kubica told reporters that the year had been very demanding, and that he is looking at different opportunists and as such has decided not to continue with Williams. He was once one of the biggest stars in the F1 before he was involved in the crash that put an end to his career before the end of the 2011 season. His injuries included a partially severed right arm, along with multiple fractures throughout his body after a roadside barrier pierced through his vehicle.

After a number of operations and years of rehabilitation, the 34 year old was left with partial movement in his right arm, but by 2017 he had became confident that he could make a return to the circuit. That wish came true for this season, and his return was met with some positivity from fans, with many impressed that he was still able to drive at this level. But the season so far has proven difficult for the team, who are currently sitting at the back of the roster.