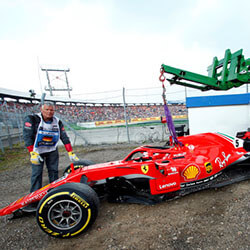 Sebastian Vettel crashed his vehicle during the second day of the final ore-season testing that took place in Barcelona, severely setting the team back in a time where every day counts enormously. Vettel lost control of his Ferrari after what was described as a mechanical problem during a 150mph crash at Turn Three, where the driver hit barriers and caused extreme damage to his car.

Talking about the incident, Vettel said that from the feeling inside the car, it was an issue that was located somewhere in the front-left corner. McLaren’s Carlos Sainz had set the fastest time during testing, from Racing Point’s Sergio Perez. Valtteri Bottas came in eighth place, while Lewis Hamilton followed with ninth.

Vettel, who came in third, had said that the team were having some difficulties trying to establish what initially caused the crash, stating that it would be a lot easier to figure out if there was a lot of run-off, and if the car didn’t hit anything straight after, because the extensive damage means that they haven’t immediately been able to pinpoint what happened. The Ferrari team managed to have the car out on the track against later on, with teammate Charles Leclerc behind the wheel as they used the last 7 minutes of the testing day after a five hour delay. It was the first major problem for the team in what had otherwise been an almost perfect testing run, who had the fastest car in the field at the time.