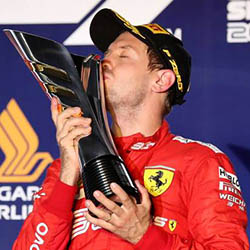 With a contentious victory in the Singapore Grand Prix, Sebastian Vettel ended his 13-month drought of no wins. The German benefited from the uncommon Ferrari approach by leapfrogging partner Charles Leclerc into the lead, Leclerc said it was “unfair” to the team over the radio and it would do little to reduce tension within the team. But for the four-time world champion, who had a hard, error-strewn season and confronted doubts about his status and future, it was a much-needed win.

Since June of last year, the German has continued a run of one major driving error every three races, and Leclerc, a two-time winner in his first season at Ferrari, has emerged as a serious threat to his number one position in the team. But he was very dissatisfied with Leclerc and made his feelings about it clear.

However, the approach of Ferrari secured their first one-two since the 2017 Hungarian Grand Prix and the first victory of Vettel since the Belgian Grand Prix at the beginning of August 2018. And it forced Lewis Hamilton down to fourth behind Red Bull’s Max Verstappen, who began second in the Mercedes. Vettel began third, and his victory depended on Ferrari’s decision to stop him early, to make sure he didn’t park and come out behind Nico Hulkenberg’s Renault, who had paused after a first-lap incident for new tyres, and charged through the lap. Vettel was warned not to push his car too hard, and held his position until near the end.