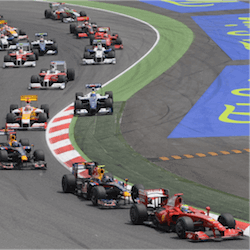 Sunday’s Spanish Grand Prix could be crucial for Lewis Hamilton and Mercedes. Apart from being 13 points behind Sebastian Vettel in the 2017 Formula 1 Drivers’ Championship, he also suffered the indignity of finishing off the podium in April’s Russian Grand Prix. While his Mercedes team were celebrating a maiden win for Valtteri Bottas on Sochi’s street circuit, Hamilton ended the race in fourth place, behind Vettel and Kimi Raikkonen.

The British driver also finished second to Vettel in the Australian Grand Prix, and again in Bahrain, with his only victory in the 2017 championship so far coming at the Chinese Grand Prix in Shanghai. With Ferrari’s Raikkonen making the podium for the first time this year in Sochi, and Mercedes teammate Bottas now challenging for top-driver status, Hamilton will be under pressure at the Circuit de Catalunya-Barcelona on Sunday.

With two wins and two second places, Vettel currently dominates the drivers’ championship. Despite that, however, Mercedes is still a point ahead of Ferrari on the constructors’ ladder, due in part to Bottas outperforming Raikkonen in Melbourne and Bahrain. However, with 16 races still ahead, both drivers’ and constructors’ championships are still wide open.

Veteran Formula 1 legend and non-executive chairman of Mercedes Niki Lauda reckons that Ferrari and Mercedes are so finely balanced at the top of the ladder, the upgrades introduced on the cars this week could see a “reset” of the championship on the Catalunya circuit. Ferrari and Red Bull are said to be working on improving aerodynamics for the Spanish Grand Prix, while it is believed Mercedes is focused more on bringing their cars’ weight down.

Red Bull drivers Max Verstappen and Daniel Ricciardo continue to be frustrated by their cars. In Sochi, Ricciardo had to retire in the fifth lap after his brakes caught fire, and he was also denied a finish by mechanical problems in Melbourne.

It was brakes that forced Verstappen to retire in Bahrain as well, and he almost missed the start of the Russian Grand Prix with a water pump issue, after which he finished fifth. He will be hoping for a trouble-free race on Sunday, and the chance to repeat his 2016 Barcelona win.