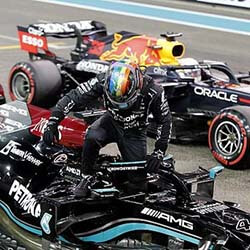 Tensions are higher than ever before as Lewis Hamilton and Max Verstappen head into the Formula One season decider in Abu Dhabi this weekend. While the pair head into the season finale tied on points, the possibility of the title being decided by a crash clearly remains an issue of stress and contention for both drivers.

After two major crashes occurred at Monza and Silverstone, the season turned even more punctuated by stories of unpleasant duelling between the two rivals. Last weekend’s two time penalties imposed on Verstappen had been the result of but one of many driving infringements threatening to topple the season in an untoward manner.

During a sitting of the pair for the final press conference, while seated only a few feet apart, the atmosphere between Verstappen and Hamilton could be felt in a palpable and negatively intense manner. While the season had begun as a time of mutual respect between the two, the sense of friendly rivalry has over time fallen completely apart.

The Dutchman also went on to express a sense of grievance and frustration at the time penalties imposed upon him by race officials in Saudi Arabia. He said he thought while both he and Hamilton had been in the wrong, only he (Verstappen) had been singled out and penalised.