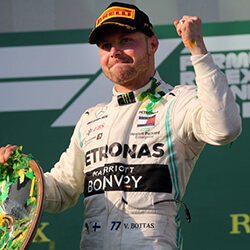 Valtteri Bottas has won the season opening Australian Grand Prix after he overtook world champion teammate Lewis Hamilton. The Finnish driver too the lead position at the start of the race from Hamilton, who had taken a slower start from pole position, and even managed top claim a new bonus point for the fastest lap.

Hamilton was left behind and was forced to concentrate on fighting off Red Bull’s Max Verstappen for a chance at second place. Verstappen passed Sebastian Vettel for a third time on a sobering day for the Ferrari team. Vettel, talking to his team at the two-thirds distance, asked they were they are so slow, and was told that they don’t know. The short and concise conversation summed up the entire opening event for the team.

It was a weekend that had started in grief after the death of F1 director Charlie Whiting, who had been one of the most influential people in the sport. Whiting, who was 66 when he passed away, was preparing to officiate the opening races as the official race starter, and was in charge of all the rules related to F1. After the race, Bottas dedicated his victory to Whiting, thanking Charlie, and saying that the win was for Charlie and for all of the work he had put into F1. He continued by saying that he had done massive amounts for the racing franchise, and gave thanks from all of the drivers.