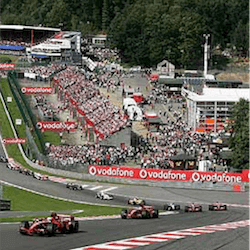 Stoffel Vandoorne, the 25-year-old McLaren-Honda driver, is apparently as keen for the Belgian Grand Prix to start as Formula 1 fans are. Aussie punters are eagerly awaiting Sunday’s resumption of the season after the summer hiatus, and Kortrijk-born Vandoorne has said he’s really looking forward to racing in front of his home crowd for the first time.

He’s a very long shot for a winning bet, but if he miraculously pulled it off, he’d make his supporters very happy, as betting sites are offering him at odds ranging from $500.00 to $3000.00. More likely, the Belgian will be happy with a Top-10 finish and his second points of the season.

He’s currently 18th on the ladder with one measly point, after finishing 10th in Hungary last month. Vandoorne and teammate Fernando Alonso both suffered poor openings to the 2017 Formula 1 season, thanks to recurring power problems in their McLarens that saw Vandoorne retire or unable to start in four races, and Alonso in five.

New power units they received in July have revived their season, but  it’s unlikely that either driver expects to make it too far up the table in the final nine races of 2017. A few more finishes in the points would at least look respectable, and Vandoorne is hoping that home-ground support will boost his chances at Circuit de Spa-Francorchamps.

For the first time since the days of Michael Schumacher, the grandstand at Spa-Francorchamps is sold out for Sunday, and sadly for Vandoorne, it doesn’t look like he’s the draw-card. Red Bull’s Max Verstappen, the 19-year-old Dutch wonderboy born in Belgium, is being given the credit for bringing back the fans, so Vandoorne could see his thunder stolen by a wall of orange in the stands.

Verstappen won his first Grand Prix in Spain last year, becoming the youngest driver ever to do so. He has also been plagued by car trouble this year, retiring from five races, but he’s finished in the points in all the others. His only podium so far has been a third in China, but lying sixth on the ladder, he’s at odds of $12.00-$24.00 to win on Sunday. Hamilton, Vettel, Bottas and Raikkonen are all ahead of him in the betting, but he could surprise. You can get your bets in online at Luxbet and see if you can predict who makes it past the chequered flag first.