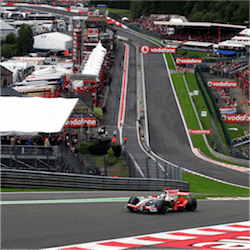 Belgium-born Dutch national Max Verstappen is being credited as the reason for the Belgian Grand Prix’s return to popularity among motorsport fans in the region.

The 19-year-old racing prodigy burst on the scene in 2015, then aged just 17, and quickly racked up a slew of ‘youngest driver in history’ records: to compete in Formula 1, to lead a lap, to set a fastest lap time, or to secure points in a Grand Prix. At last year’s Spanish Grand Prix, he became the youngest driver ever to win one.

As a result, there is huge excitement among Belgian and Dutch fans for the 12th race of the 2017 Formula 1 season, set for 27 August at the Circuit de Spa-Francorchamps.

With the German Grand Prix absent from this year’s calendar, the Belgian Grand Prix is also attracting spectators from further afield in western Europe, and for the first time since the days of Michael Schumacher, the grandstand at Spa is sold out.

It’s great news for Formula 1 that Verstappen is stimulating crowd interest in the Low Countries, but Australian punters might need more than that to back him for a win at Spa.

Online betting sites have him offered at a range of odds from $12.00 to $33.00, with most at around $16.00, but he’s still fifth in the betting behind Lewis Hamilton, Sebastian Vettel, Valtteri Bottas and Kimi Raikkonen, with Daniel Ricciardo breathing down his neck at around $20.00. If you want to wager on the race you can get your bets in online at Luxbet and see if you can guess who crosses the finish line first.

Verstappen finished fifth overall in the Formula 1 World Drivers’ Championship last year, after switching teams from Scuderia Toro Rosso to Red Bull Racing after four races, and winning his maiden Grand Prix on his very next start. Although he finished second in Austria, Britain, Malaysia and Japan last year, his third place at the Chinese Grand Prix in April is his best 2017 finish to date.

Mechanical glitches haven’t been helping: he’s retired from five of the year’s 11 races so far, and as a result lies sixth on the drivers’ ladder, 49 points behind Raikkonen in fifth. Vettel, on 202 points, is way out of reach, and Hamilton, Bottas and Ricciardo are in second, third and fourth respectively.

Even buoyed up by home-crowd support, Verstappen will have to deliver an extraordinary race to win at Spa, and it still won’t move him up the rankings if he does.