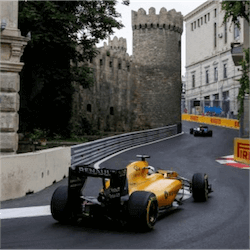 The Red Bull driver Max Verstappen may be living a self fulfilling prophecy. After a disastrous season so far he does not look forward to his next performance at the Azerbaijan Grand Prix, formerly known as the European Grand Prix.

The 19 year old driver has seen a string of bad races greatly affect his confidence and he has openly stated that he does not care about the Azerbaijan Grand Prix as the season is already such a disappointment for him and the team. In his race in the Spanish Grand Prix, he also failed to place.

Verstappen finished in 5th place in the Monaco Grand Prix which was not bad for Team Red Bull who have been having an uphill battle as the new guys of racing. Following Monaco was the Canadian Grand Prix which ended in a not completed race for Verstappen due to a battery failure.

Verstappen was in the second place, challenging Valterri Bottas in his Mercedes for the second place position. The fact that he was able to hold on to the position for so long in an inferior car says a lot about the skills of the young Verstappen.

Unfortunately after the 11th lap the car systems failed and thanks to the pit stop strategy in place for the team Verstrappen’s team mate, Daniel Ricciardo moved ahead of him for the second place finish. Ricciardo has not shared in any of Verstappen’s poor luck with finishes in the top three spots in his last three races.

Team Red Bull’s boss, Christian Horner has come to Verstappen’s defence and stated that the driver is understandably upset but he should not be too hard on himself.

He has also praised Verstappen’s sterling performance against Mercedes and other teams and he has said that Verstappen should not focus on the smaller things but rather look at the bigger picture.

The Azerbaijani Grand Prix is the rebranded European Grand Prix that is held in Baku. Last year saw its first edition being run and this year the people and the fans are much more prepared. While last year the town was quite frustrated with the road closures, the populace have fully embraced the event that certainly is a great boost for the local economy. Crownbet is offering great odds on the race and is ideal for any F1 fans wanting to get a wager in.

According to the city 55% of the tickets have been sold to foreign visitors so far. It should be exciting what the second ever event for Baku holds.