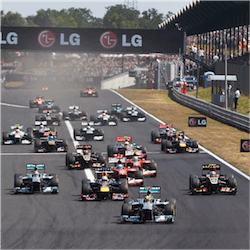 The 2017 Formula 1 calendar is on a four-week break before the Belgian Grand Prix on 27 August, so it’s a good thing Sunday’s Hungarian Grand Prix gave Australian punters plenty of passion and excitement to tide them over. Ferrari took the one-two in Budapest’s scorching heat, after Sebastian Vettel started in pole position and stayed in front for 70 laps, taking his first 25-pointer in the five races since Monaco.

Vettel’s win is even more remarkable, considering that he battled with a steering malfunction throughout the race. Ferrari teammate Kimi Raikkonen was less than a second behind him, claiming second place for only the second time this year.

Vettel managed to extend his lead in the drivers’ championship, which Mercedes star Lewis Hamilton had been closing down, back to 14 points: helped in part by some unexpected Team Mercedes chivalry from the British driver. Vettel is now on 202 overall. Raikkonen still lies fifth on the drivers’ ladder, with 116 points.

One surprise in Budapest that got tongues wagging was Hamilton’s sporting treatment of teammate Valtteri Bottas. A faster qualifying time saw Bottas start third on the grid, behind the Ferraris, with Hamilton in fourth. In the closing stages of the race, Bottas was ordered to let his teammate through, so that Hamilton could challenge Vettel and Raikkonen.

When it became apparent he wasn’t going to pass the Ferraris, however, Hamilton let his Finnish teammate pass him again, so that Bottas could get his seventh podium of the season. This may prove ironic later, if Hamilton, now second on the ladder with 188 points ahead of Bottas on 169, loses the drivers’ championship to Vettel by three points or less.

A driver feeling justifiably aggrieved after Budapest is Red Bull’s Daniel Ricciardo. Starting in sixth on the grid, the Australian was moving up smoothly into fourth in the opening lap, when teammate Max Verstappen connected with him on the fourth turn.

The crash sent Ricciardo off the track, and his car began losing oil, forcing him to retire. He was still angry after the race, calling Verstappen’s move ‘amateur’. He has every reason to be upset: although he’s still in fourth on the drivers’ ladder, the Budapest disaster allowed Raikkonnen to catch up. On 117, Ricciardo is now just a point ahead.