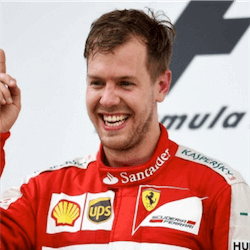 For the past three years, Formula 1 has seen no serious challengers to the dominance of Mercedes AMG Petronas, the team that finished top of the constructor’s standings by a margin of almost 300 points in last year’s championship. Sunday’s Australian Grand Prix, the first of the 2017 Formula 1 World Championship, made an exciting change for many motorsport punters online.

German Sebastian Vettel, who finished fourth in the 2016 drivers’ championship and is now in his third year of racing for Scuderia Ferrari, won the Melbourne race in one hour, 24 minutes, 11.672 seconds. He finished a clear 9.975 seconds ahead of Mercedes’ Lewis Hamilton, who had started the race in pole position.

In post-race interviews, Vettel did his best to understate the significance of the win, but it is clear to Australian punters that Ferrari has both the cars and the drivers to be a serious threat to Mercedes this year.

In track testing at the Circuit de Barcelona-Catalunya earlier this month, the top lap time in the first week was achieved by Bottas in his Mercedes, but that was bettered a day later by Raikkonen for Ferrari, who shaved off another 0.676 seconds.

However, the fact that Vettel started the Australian Grand Prix second on the grid and only managed to pass Hamilton through skilled pit-stop decisions, highlights another concern that drivers like Hamilton have raised: the impossibility of passing on certain circuits.

Especially on street circuits, such as those used in Melbourne and in the iconic Monaco Grand Prix coming up in May, increased aerodynamic downforce in the latest cars is causing major turbulence. Last year, Hamilton said, this began affecting following cars when they were about one second behind the car in front; this year, the effect started at twice that distance.

Formula 1 may have to look at some rule tweaks, if racing fans are not to see a 2017 championship in which passing is simply out of the question in several races.