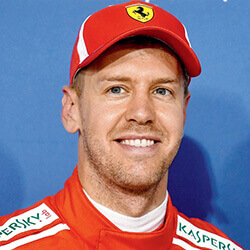 Sebastian Vettel’s triumph beneath the floodlights was the 49th one in his Grand Prix career, and an unparalleled fourth at the Sakhir dust bowl circuit.

Vettel held onto his position by the skin of his teeth, going on to win a tense Formula One Grand Prix in Bahrain in his 200th race start, which took place on Sunday.

As his tyres faded, the leader of the championship managed to take the chequered flag a mere 0.6 seconds clear of Valtteri Bottas, for Mercedes, who had been piling on the pressure in the last ten laps.

Bottas’ teammate, and reigning world champ, Lewis Hamilton, who started the race ninth after being placed on a five-place grid penalty because of an unscheduled gearbox change, finished in third place. Vettel now leads Hamilton with 17 points after two of the 21 races have been completed.

This win made the the 30-year old Vettel, who also placed first in Melbourne just two weeks ago, the very first Ferrari driver to win the first two races of a season since his compatriot Michael Schumacher managed to do it back in 2004.

A jubilant Vettel told his team that his tyres had had it in the last ten laps, talking to them via radio after he crossed the line, after he had assured them that everything was under control. He recognised, with a smile later on, that that was not exactly the case, but all’s well that ends well!