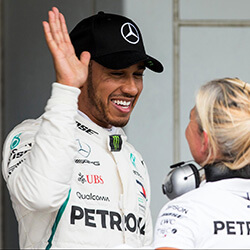 Hamilton’s main rival at the moment is Ferrari’s Sebastian Vettel, and while Vettel has done well in many of this season’s races, his last race saw him finish in sixth place due to a collision with Max Verstappen. The accident forced Vettel even further behind Hamilton to a staggering 67 points in total.

The next destination for the F1 drivers is Austin, Texas, for the United States Grand Prix, which many believe will be one of the most memorable races of the year so far. Hamilton is so far ahead of the pack that a win at the USGP could mean the championship title win for the British racer.

In order to clinch the title, Hamilton will either need to finish eight points ahead of Vettel, or he will need to come in first, with Vettel finishing below second. So far, their third biggest contender, in the form of the Red Bull team, has had a number of mishaps linked to car and tyre performance that has seen them fall back. While both Ferrari and Mercedes have had their vehicles working in top condition, Vettel’s continued mistakes and apparent desperation have begun to see him falling behind with each subsequent race. While he may not win the season title, he could still topple Hamilton’s chances before the final race.