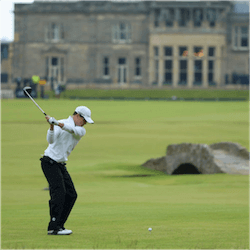 Australia’s golf fans are still gearing up for the US Open at Erin Hills in Wisconsin, USA, from 15-18 June, but the third major of 2017 is coming hot on its heels in July. The seaside town of Southport, on England’s west coast, will be home to the 146th edition of the famed British Open at the Royal Birkdale Golf Club from 20-23 July.

It will be the 10th time the club has hosted the tournament, which has remained at a steady par 70 since 1991, over three different courses. When the Open moved to Southport in 2008, the total distance of the course also changed to the longest it’s been since the tournament’s inception in 1860, at 6,559m, so it presents a difficult challenge to a field of top golfers.

Strong Fields for Both Opens

Both the US Open and the British Open are likely to be packed with major stars jostling for the title, and there are several that punters will find worth considering. Sergio Garcia won the 2017 Masters, but Rickie Fowler, Jordan Spieth and Hideki Matsuyama also have a tournament win each under their belts this year.

Justin Thomas took two victories in a row at the start of the year, and World Number 1 Dustin Johnson took three on the trot. Then there’s World No. 2 Rory McIlroy and England’s Justin Rose; they are both currently resting injuries, but ought to be fit again for both Opens.

Betting enthusiasts will also want to keep an eye on the progress of Jason Day and Adam Scott in the Memorial Tournament, currently on at Jack Nicklaus’ Muirfield Village Golf Club in the USA’s Dublin, Ohio. The two Australians, ranked World Nos. 3 and 10 respectively, are both looking strong and confident as they warm up for the Opens.

Day has played only one tournament this year: the AT&T Byron Nelson in Dallas. He came within an ace of winning it, but lost to Billy Horschel after three-putting the first playoff hole. Scott finished in a tie for ninth in the Masters and sixth in the Players Championship, but he has already managed three top-five finishes in the Memorial Tournament, so this might be his year.