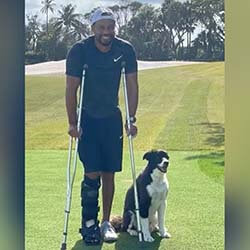 Golfing legend Tiger Woods has for the first time since his February motor vehicle accident posted a picture of himself on social media. Woods can be seen posing alongside his faithful canine “rehab partner”, with the golfer captioning the image with a comment about his course coming along faster than he is.

Woods sustained serious injuries when his SUV ran from a Los Angeles road in February, an incident that raised many questions over whether he would ever play again, especially given his already existing and long history of back issues. The champion golfer is however clearly determined to make a full recovery and can in his Instagram post be seen balancing on crutches and with the leg brace to his right leg the only real indication of anything being out of the ordinary.

The legendary golfer was a the time of the February car crash incident driving more than twice the permitted speed limit down a downhill stretch of road notorious for motor vehicle accidents. He is thought to have lost control of his vehicle before completely wrecking his SUV. The February collision was his third in only 11 years.

According to police documents, Woods had told investigators on the scene that he didn’t remember how or why the crash had occurred, nor did he remember driving on the day in question in the first place. He was at the time of the crash recovering from a back surgery that had taken place only two months earlier.