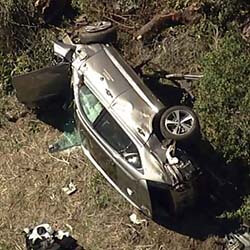 The LA County’s sheriff’s department has carried out a search warrant on the crashed car of golfer Tiger Woods after he was involved in a single-car crash last week. The department did however confirm that investigating any car’s “black box” was simply a routine procedure followed in any crash. The black box could potentially contain information such as speed, braking activity, mechanical failure, etc., and in Woods’s case, did not indicate any fault on the part of the driver of the vehicle.

Deputy Sheriff John Schloegl on Tuesday told a US news publication that the purpose of examining the car and the black box was to determine whether a crime had been committed in terms of the laws of the road. Schloegl said that this was a routine step in any incident involving a car crash, and that the mere presence of an investigation did not imply any sort of criminal culpability on the part of the famous golfer.

Schloegl also confirmed that there had been no probable cause present that would lead police to apply for a warrant to test Woods’s blood, and that the golfer had been lucid and awake when taken to hospital following the incident. He said it would be totally unfair to assume guilt and intoxication on Woods’s part simply because of his history.

Woods was arrested on suspicion of driving under the influence in Florida in 2017. His arrest came after he was discovered passed out in his car. The pro-golfer later pleaded guilty to a charge of reckless driving.