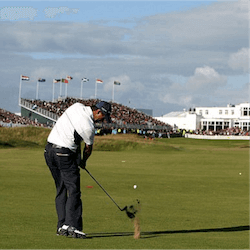 Early betting for the 146th Open Championship, to be played at Royal Birkdale Golf Course in Southport, England, from 20-23 July, had current World No. 1 Dustin Johnson and No. 4 Rory McIlroy leading the field at $10.00 for an outright win. But Australian Jason Day was one of the six golfers tied at second-favourites in early betting, all at $15.00.

Day needs to do well at this year’s edition of the 156-year-old championship, if he is to maintain his PGA ranking. After failing to make the cut at the weekend for the US Open when he scored two triple-bogeys in a round for the first time ever, the Queenslander dropped from No. 5 to No. 6.

He didn’t improve matters with his next tournament, the Travelers Championship in Connecticut. He missed the final cut on the Friday by two strokes, technically one stroke, because he made an error on his scorecard and recorded one of his birdies as a par. Australian punters are hoping the two disappointments will fire him up to deliver a powerhouse performance at the British Open, which is being played at the west-coast English course for the 10th time.

World No. 14 Adam Scott is the other Australian golfer to watch at the Open. His early betting odds were at $25.00, and it was only three years ago that he was ranked World No. 1. He won the Honda Classic and the WGC-Cadillac Championship last year. However, he also lost out in the weekend cut at the US Open, so he has some ground to make up in Southport too.

There are seven other Australian golfers already qualified for the 2017 British Open, although several more are currently playing qualifiers in the hopes of making the final field of 156. Victorian Marc Leishman, who won his second career PGA Tour event at the Arnold Palmer Invitational in March, was the best of the rest in early betting, at $65.00.