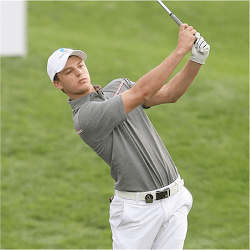 At the start of the NSW Open, all eyes were on Robert Allenby, but at the end of the day it was his playing partner Brett Coletta who received all the applause. The dynamic 20-year-old amateur shot a breath taking 10-under 62 in the first round of the NSW equalling the course record at Stonecutters Ridge. Walking off the course at the end of the day, Coletta was halted by a string of enquires about his expectations at the event and his professional status.

Just two weeks ago, Brett Coletta defeated a top-class field to take home the much coveted Queensland Open. The Queensland Open is the first professional golfing event of the Australian summer and is a good indicator of the talent coming through since the previous year’s season. The 20-year old Victorian amateur captured the Queensland Open just weeks after he missed a crucial birdy on the 18th hole of the Asia Pacific Amateur event held in Korea. Had he pulled off the birdy, he would have secured a start at the international Augusta event held in April Next year.

One of the questions he faced as he came off the course was if the missed opportunity still played on his mind. His answer was “absolutely.” He explained that the chance to play in a major is the ultimate goal and it is definitely going to sting. He hopes to get there in the near future. Coletta decided to enter the NSW Open with his amateur status despite the opportunity to earn some decent money playing professionally. Whether or not, the young golfing star feels under any pressure to win is clearly having a negligible impact on his game.

In the first round at the NSW Open, Coletta displayed superb iron play, rock-steady putting with distinct lack of errors to pull off the record equalling round of 10-under 62. Speaking to the press, Brett explained that it was a bit of a blur when he started out. Suddenly, when he looked again, he was on 7-under through nine.

Coletta admitted that he played an almost flawless game and stuck to his own game plan. He played a really clean game of golf and showed the rest of the competition how it was done. The young star shot five birdies and an eagle on 15 for the front nine. He finished his final nine with a total of three birdies and six pars to claim the lead against some of Australia’s best golfers. Currently, Rory Bourke and Australian tour veteran David Brandson are a shot back at nine-under.