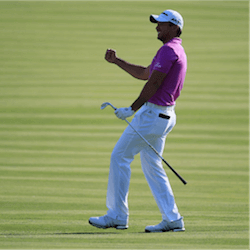 Day 1 of the 146th Open Championship, AKA the British Open, being played this year at Royal Birkdale in Southport, England, saw some significant shuffling of the betting odds. Some bad weather sleeting in off the Irish Sea played havoc with many players teeing off early, including PGA World No. 1 Dustin Johnson.

The favourite at $9.00 before the tournament started, the American disappointed fans hoping for a triumphant comeback after a year-long drought as he battled back problems. Johnson carded a 1-over 71 on Thursday, leaving him tied in 58th with 20 other players. These include Northern Ireland’s Rory McIlroy, who started as third favourite on $11.00, plus other contenders like the USA’s Rickie Fowler and England’s Justin Rose.

The most successful of the high-ranking golfers on Day 1 was another American, Jordan Spieth. Second favourite at $11.00 at the start, Spieth started late enough to miss the wet weather and finished on 65, at 5-under. It looks like the return to form that started with the Travelers Championship is continuing, and with three rounds left, Spieth ended Thursday the new favourite to win the tournament, at around $4.50.

However, with 36 players still within four shots of the top three and three rounds left to play, Sunday’s result is still wide open. Among those 36 are Spain’s Rafael Cabrero-Bello and the USA’s Justin Thomas, tied in sixth with four other players, with another Spaniard, Jon Rahm, among the 14 tied in 12th. Cabrero-Bello, Thomas and Rahm, offered at $28.00, $25.00 and $20.00 respectively, could also be serious challengers.