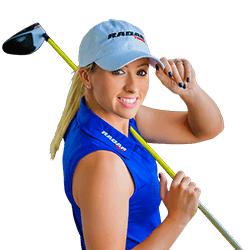 The 41 year old claimed seven birdies at The Grange, and set a first round pace with Taiwanese Hsu Wei-ling. Fellow English player Bronte Law and Australian Karrie Webb are in a group two adrift.

Talking about her start, Shadoff stated that a good start is always nice, and that she had worked on her putts at the start of the event and that it had ultimately paid off. She continued by saying that she holed three or four six footers for birdie, and that overall she hit the ball well and putted well, adding that the prior week she did not putt well, especially during the last day. Shadoff is focussed on becoming the ninth English player to claim an LPGA Tour trophy. World Golf Hall of Fame member Laura Davies has the most wins for English with20, while Georgia Hall is the most recent English winner.

Georgia Hall, Women’s British Open champion is three under following 69. Former world number one New Zealander Lydia Ko and Australian min-Jee Lee, ranked seven, are now four strokes behind in the LPGA Tour event taking place in Adelaide. They are alongside French Celine Boutier, who recently won the Vic Open. Thai world number one Ariya Jutanugarn only managed a four over par 76 by the end of the event.