Golf Gets a T20 Style Shake Up In Perth 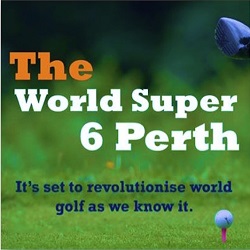 Golf to Get Twenty20 Style Shake Up

The game of golf will get a much needed revamp with the introduction of the World Super 6 Perth tournament in 2017. Set to take place from the 16th to the 19th of February, the Australian tournament will see the birth of a radically altered version of the game. After a standard 54 holes of typical stroke-play, the game then enters the exciting knockout phase. This action-packed final stage will see players battle it out in a series of six-hole matches to make it into the final round.

The Super 6 Perth tournament will employ the use of newly incorporated golf knockout rules such as the closest-to-the-pin tie-breaker rule, similar to Rugby League’s Golden Point. This will help to resolve squared matches and make for more dramatic viewing and betting. Speaking about the introduction of the Super 6 game, Brian Thorburn, chief executive of the Australasia PGA Tour explained that the Super 6 Tournament will completely change the way people view golf.

A Revolution in Golf

All over the world, traditional sports are getting a 21st century makeover. Cricket has T20, Netball has Fast Five, rugby has 7’s and now Golf will have Super 6. After the recent Rio Olympics there were several debates as to whether golf was a sustainable sport, and whether it was possibly time to replace it with one that was more popular, or had a greater viewer appeal. The introduction of Super 6 should change the face of golf and attract a whole new audience, giving the sport  a much needed face lift.

A successful tournament could lead to the foundations of a viewer-driven blueprint for the 2020 Olympic games in Tokyo. The exciting event will fill an open slot in the European Tour with the geographical location fitting in well with the schedule. The tour will take place one week after the Maybank Championship in Malaysia afterward head on directly through to the Johannesburg Open in South Africa.

If the Super 6 tournament gains momentum, it will be exactly what the Olympics needs to bring in major viewers and draw local crowds. The game will start out with 54 holes, after which a regular cut will be made at the 36-hole mark to reduce the field down to 24 players. The bottom 16 players will then battle it out in eight six-hole knockout matches to advance to the top eight. The tournament will also feature a purpose-built knockout hole that is 90m from tee to pin held on the 18th green.

Super 6 sounds like it could be exactly what golf needs to make it a more current sport and betting on this type of tournament is sure to be  a huge hit with those who like fast-paced, action filled wagering opportunities.