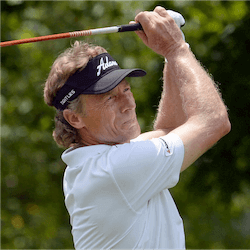 The approach of his 60th birthday in August isn’t slowing Bernhard Langer down much. The veteran German golfer, who took 74 championship wins over several different tours as a pro and has won another 38 in his nine years as a senior, is the favourite to win the USA’s Constellation Senior Players Championship this Sunday.

The 15th tournament in this year’s PGA Tour Champions, as the senior tour is now known, the 2017 Senior Players Championship starts on Thursday, at Caves Valley Golf Club. The course is located in Owing Mills, a town near Baltimore, Maryland. It’s the first time this tournament will be held at Caves Valley, but it may not matter to Langer: he won the event in 2014 at Fox Chapel Golf Club in Pittsburgh, in 2015 at Belmont Country Club in Massachusetts, and again last year at the Philadelphia Cricket Club.

Another factor contributing to Langer’s $4.00 favourite status is his record in the 2017 PGA Tour Champions season so far: he has won three championships, and is sitting atop the Money List on total prize money of $1,815,666. If he wins at Owing Mills on Sunday, he’ll pocket $420,000 of the $2.8 million purse, pushing his 2017 earnings over $2 million with 12 more tournaments left in the season.

Other Contenders Worth Considering

There are a couple of golfers who could give Langer a run for his money this weekend. Following his win at the American Family Insurance Championship in Wisconsin last month, his second of the 2017 season, 57-year-old American Fred Couples could also shine at Caves Valley. Some betting sites now have him as second-favourite to win the Senior Players Championship, at $4.30. His earnings this year stand at $1,103,147, placing him third on the Money List.

Second place is occupied by 56-year-old American Kenny Perry, on $1,225,385 after winning the US Senior Open in Massachusetts at the start of July. It was his ninth PGA Tour Champions victory, so he could be more dangerous to Langer and Couples this weekend than his current $16.00 odds suggest.