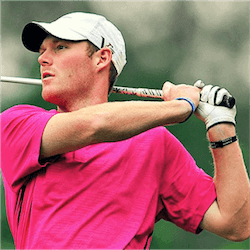 Greyson Murray, the young PGA tour rookie came up with a brilliant idea for a caddy should he qualify for the Masters. It seems the 23-year-old has issued a plea to Playboy star Lindsey Pelas on Twitter to be his caddy should manage to qualify. The twitter feed read something along the lines of “If I win next week in Houston, would you be my Caddy?”

To everyone’s amazement including Murray, Pelas said yes. The thought of Pelas accompanying him on the par-3 tournament is more than enough motivation for Murray to compete at his best. He is however considered a long shot for the masters having missed the cut in his last five tournaments. The odds are stacked against him. He missed the cut on 8 out of his last 11 tournaments and must win the Houston Open to qualify for the Augusta and make his dream date come true.

Should Murray fail to qualify, Pelas will miss out on her cameo on the green. The Playboy beauty should have no trouble keeping herself busy though. As a former Playboy Cybergirl of the Month, Pelas is a regular on social media with a massive 6 million followers on Instagram. The 25-year-old beauty regularly shares selfies posing with her on/off boyfriend Calum Best.

After getting together in August 2016, the two reportedly put their heated romance on hold when Best made his appearance on the UK’s Celebrity Big Brother show. So, does Murray have a chance with Pelas? Unfortunately, she seems smitten with Best despite his inability to commit to a full-time relationship. Speaking to the press, Pelas said that Best cannot be in a full-time committed relationship which she totally understands. She did say that seeing him with other girls made her feel jealous.

Added to the mix, both Murray and Best have competition from Australian cricket legend Shane Warne. It seems, the former Australian spinner has been making a habit of supporting Pelas by liking her social media pages. Pelas has also gone on record saying the she has the hots for NFL star J.J Watt. This was around the time when he was reportedly linked to Caroline Wozniacki. Pelas even went as far as sending out a public Twitter message urging Watt to contact her. What this all means for Murry is that he had better bring his A-game to Houston.