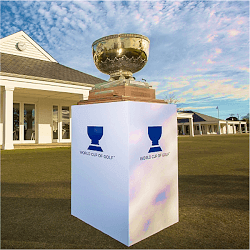 The field that has assembled for the 2016 Golf World Cup has been hailed as the best in Australia for some years. This week, there are three players who are ranked in the top ten including Hideki Matsuyama ranked 6th, Adam Scott ranked 7th and Alex Noren who is ranked 9th in the world. To add to this, the field contains another 14 players who are all ranked in the top 50 of the world. Added up, the players hold 29 titles just in 2016 including the likes of Jimmy Walker who won his maiden title at the PGA Champs in July.

The star-studded line-up is sure to offer some great entertainment and superb betting opportunities.

Here is everything you need to know about this year’s World Cup:

The competition will take place at Kingston Heath in Melbourne and run from Thursday through to Sunday. The total prize money is $10.9 million or $8 million US. The course has a total length of 6503 meters with a Par 72. This superb course has been rated by Golf Digest Magazine as the 18th overall best course in the world. You can catch all the action live on channel 7, starting from day 1.

So far the Betting odds look as follows:

Teams to watch this year include the Australian team featuring Adam Scott who cites Kingston Heath as his favourite course. Teaming up with Victorian Golfer Marc Leishman puts the Australians in a good position to win the Cup with support from the crowd.

The Japanese team is a strong contender this year with Hideki Matsuyama breaking into the world top 10 this year after three wins from four starts. He also picked up second in the only event he didn’t win being the HSBC Championship in Shanghai. He partners up with Ryo Ishikawa who has been known to pull off some spectacular plays.

The USA will be the only team to have two players ranked inside the top 20. This formidable team includes Rickie Fowler who has shown that he can certainly win at home and away. He took home the Scottish Open trophy last year on a links course and sites it as his favourite style of golf. Jimmy Walker joins him. Ranked at number 19, Walker is good mates with Fowler and could see a return to form on the course.

The 2016 Golf World Cup looks set to be action packed, and punters and golfing fans are sure to be glued to their screens.