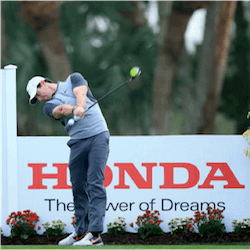 Adelaide-born golf star Adam Scott finished Thursday’s first round of the Honda Classic in Florida in a tie for 24th place with 17 other players, at -2. The Australian defending champion is a stroke behind countryman Marc Leishman, who is tied on 12th at -3 with 11 other golfers.

As these results indicate, the 46th edition of the $6.4 million PGA Tour event in Palm Beach Gardens is shaping up to be a closely matched, tightly fought contest. At the end of Day 1, there were just 20 strokes between the tournament leaders and the man languishing at the bottom of the 141-player leaderboard: American Matt Every, who finished on +14.

Two American 26-year-olds finished on -6 at the top of the leaderboard on Day 1: Texan Cody Gribble and South Carolinian Wesley Bryan. Gribble managed to set a new statistical record in his round, hitting all eighteen greens in regulation: in other words, reaching the green on each hole while still at least two under par. The feat had never been accomplished before on the Champion Course at the PGA National Golf Club.

The Dallas native even recovered from a three-putt bogey on the 16th hole, but a birdie on the par-3 17th and again on the 18th took him to top spot on the leaderboard.

Wesley Bryan was among the few players to take a birdie on the sixth hole, one of two reduced from par 5 to par 4 for the Honda Classic. A 12-foot putt on the seventh saved par, and his 10-foot birdie on the eighth took him level with Gribble. He held that position for the rest of the round, finishing on -6 too.

German Martin Kaymer and Indian Anirban Lahiri were two of the latest finishers of the day, and they sneaked home at -5 to bump seven other hopefuls on -4 from third into fifth place.

There are four Americans in that group of seven: Ben Crane, Sean O’Hair, Rickie Fowler and Ryan Palmer. The others are Taiwan’s C.T. Pan, Englishman Ian Poulter and Canadian Graham DeLaet.