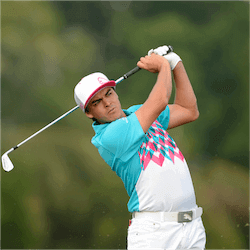 Thousands of Australian golf fans were hoping local star Adam Scott would retain his Honda Classic title in Florida last month, but they were disappointed. A head cold mixed with jet-lag conspired against the 36-year-old, so right from the start of the four-day tournament at the PGA National course in Palm Beach Gardens, he wasn’t really in contention.

Scott carded a round of 68 on Day 1, but -2 was as good as it would get for Adelaide-born Swiss resident, who added a 69, a 71 and a 68 in the next three rounds, to finish -4 for the tournament. That left him in a tie for 14th with six other players, eight strokes adrift of tournament winner Rickie Fowler.

Scott had just a few days to recover after the Honda Classic before starting his next title defence; the 2017 WGC Mexico Championship, which he also won in 2016. At the time of writing, it remained to be seen if he’s fully fighting fit again. The four-day Naucalpan tournament finished on Sunday, 05 March.

Fowler Back in Top 10 after Win

Rising US star Rickie Fowler, aged 28, managed to preserve his 54-hole lead for the first time in his career, to seal the win and scoop more than $1.1 million of the $6.4 million purse. It’s his sixth significant tour victory since he turned pro in 2009, and it boosted him back into the Top 10 of the PGA World Golf Rankings, at No. 9.

Last Sunday, it looked like the California-born Floridian was about to blow his lead in a final round, which he began on -13, when he was two-over by the end of the front nine. However, he regained his composure and finished one-under for the back nine, giving him +1 overall on the round and -12 for the tournament, four strokes clear of any competition.

Fowler wasn’t the only American to do well at Palm Beach Gardens; US golfers made up six of the Top 10 on the final leaderboard. The others were Morgan Hoffman and Gary Woodland, tied for second at -8, and Billy Horschel, Chad Collins and Wesley Bryan, who were among six golfers tied for fourth at -7. The rest of the fourth-place group comprised Venezuelan Jhonattan Vegas, German Martin Kaymer, and England’s Tyrell Hatton. Canadian Graham DeLaet finished tenth, on -6.